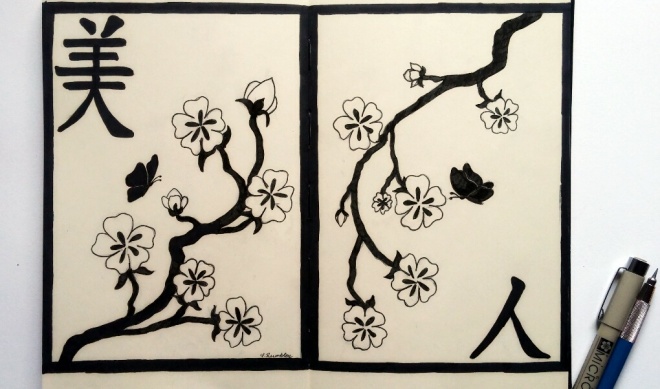 In the process of working on my current Sun mandala carving, I got hit with a Japanese aesthetics bug. The last two days I’ve been learning about the principles and concepts of aesthetics and beauty that has permeated Japanese culture throughout history and present day.

So after two days of personal study, half asleep in the twilight of this morning, this design formed in my mind for possibly a future set of 5×7 linocut carvings. It’s nothing I plan on doing anytime soon but rather just an idea I want to keep around for when I need a little break from pointillism.

The kanji on each panel together represent the word “bijin”, meaning “beautiful person” but is mostly directed towards women so it also means “beautiful woman”. In Japanese art, paintings and drawings of bijin were called “bijin-ga”, a particular genre of Ukiyo-e paintings. The Ukiyo-e genre of art flourished in Japan from the 17th through 19th centuries where artists produced woodblock prints and paintings of such subjects as female beauties, kabuki actors, sumo wrestlers, landscapes, historical scenes, folk tales, flora and fauna and erotica. This obviously isn’t a representation of an actually bijin but it does seem to fit the flora and fauna category of the Ukiyo-e genre. Personally I just have an affinity for the word bijin but I can see hints of the elements of the bijin-ga and Ukiyo-e genre in my own work. Most of my subject matter is focused on beauty, women and flora. Maybe I was a Japanese painter in a former life. That’s a nice thought to hold on to. 😊

Pen and ink artist inspired by Nature, Beauty, Spirit and Song. View all posts by Q.