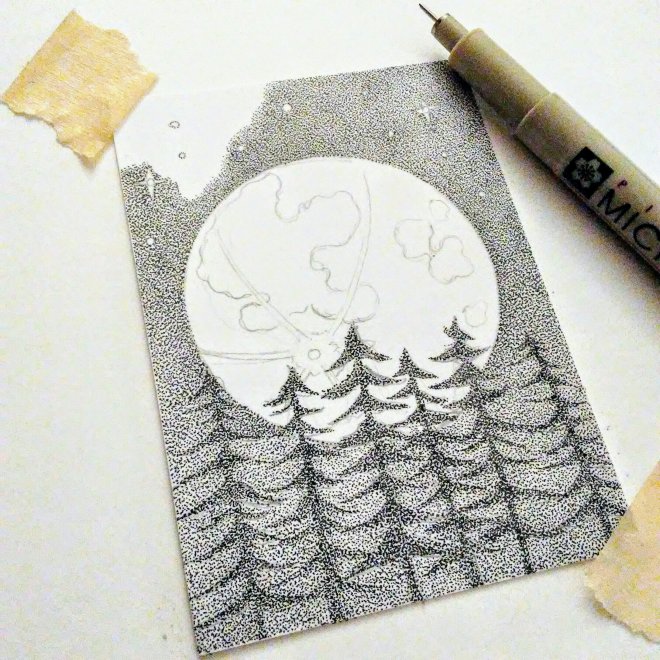 So I pulled out some old CDs and been listening to Cirque Du Soliel’s, “Varekai” soundtrack which is the inspiration for this little piece I’m calling “Moon Licht”, titled after a song from the soundtrack. I think it means moon light but I’m not quite sure.
I’ve been working on it for a week now. Usually I would be finished but I’ve switched out my 0.20mm nibbed pens for 0.15mm pens. It seems like a rather insignificant change but it makes such a big difference. I decided to switch because when working in smaller spaces the size of the inked dots will look bigger causing a more grainy effect, which honestly, has been annoying me. The times that I work in color it’s not as bothersome but when working in just black and white, it’s so much more noticable to me and therefore irksome. I really want a more even and smooth finish so I needed a smaller nib and luckily Sakura Pigma made a pen with a nib smaller then their 0.20mm that’s at an affordable price for a pack of six.
Now if you take a close look at my work in progress above, you can see the difference. The lower half of the art card was inked using a 0.20mm nib while the upper half of the night sky was inked using a 0.15mm nib. It’s a bit grainy on the lower half and smoother at the top. Although that smoother look is the desired effect I’m striving for, the major draw back to working with a smaller nib is that it takes more time and effort to get that look…and that’s just for one layer of ink. If I want a deeper black I’ll need to go back over it with a second, possibly a third layer of ink. Thank goodness I prefer to work on a small scale otherwise a drawing say the size of 14 x 17 could take two lifetimes worth of patience. 😊 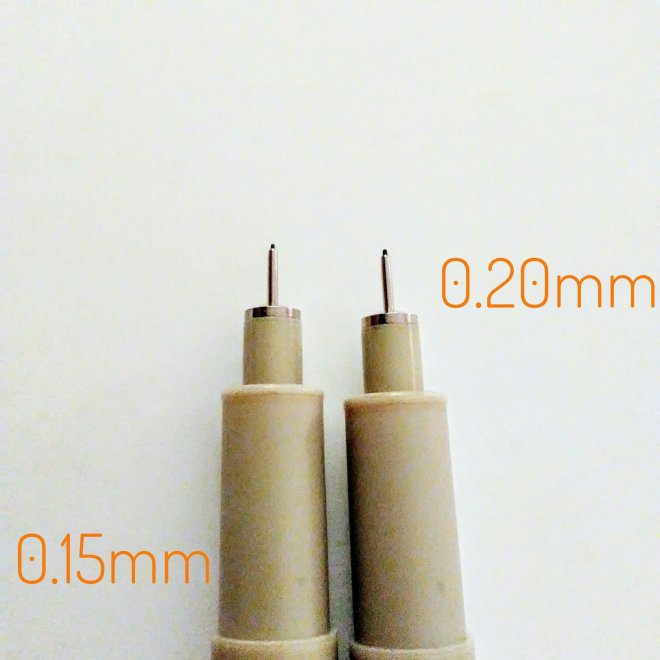 I don’t breathe, eat and sleep art. I really don’t live up to that cliche of the artist life. Being an artist is a delicate balance between the daily tasks of everyday living and creating art that I still have yet to master. But when I do turn my attention towards art whether it is my own work or the work of others, my spirit comes alive with awe. It is that liveliness that reminds me and lets me know that this is “my thing”. Other than the natural beauty of Nature in all of Her diverse forms, art is what makes my heart dance and creating it is my act of devotion to the Spirit that created me.

Finished portrait drawing of the lovely Bali based designer Manaka, also known as Voodoufairy on Instagram. This is my first attempt at doing an ACEO artist card portrait in my usual pointillistic style using color. Feel free to let me know what you think in the comment section.

A little clip of me inking an artist card of the lovely model and artist Manaka.