Well, I finished up the lineart for the Dark Wing series. I have to admit I’m excited and yet a bit nervous about working on this series. It’s all coming to me as I go along. The vision is in bit and pieces inside my head so I’m pulling it together on the Bristol board.

I was up until 1am scratching out some sketches for my next ACEO series. Most of the time if I have something in mind I go straight into the linework on the cards and then go from there. But sometimes I have to do preliminary sketches to work out my ideas, especially if it’s complex or if its a figurative piece that is a bit more involved than a portrait. Sometimes I use elements and poses from previous drawings and sometimes I do something all completely new. I’m not the greatest at drawing things straight from my imagination, especially when it’s something I’ve never drawn before, so often I need to gather reference material. You should have seen me running back and forth from my camera to strike a pose with only 10 seconds to get ready for the shot to capture some photo references. If I had the money, I would hire a model but for now I have to use myself which is not fun for me. I prefer being behind the camera not in front of it.

This next series involves beings with wings but I want to make it clear that they are not angels. They’re simply avian beings. For the moment I’m calling the series “Dark Wing” but that may change as well as some elements to the drawings. The main focus is to have female figures with wings with a little hint of fantasy and magic weaved in somewhere but I’m not exactly sure as to how just yet. My underlying artistic goal is to meld together a beautiful blend of nature and the female form with touches of magic and fantasy into a personal style that is all my own. Unfortunately my work tends to be more so some off shoot of representational art than anything else. I have a ways to go to reach my goal but I’ll get there. Anywho, these are my first sketches that I wanted to share. 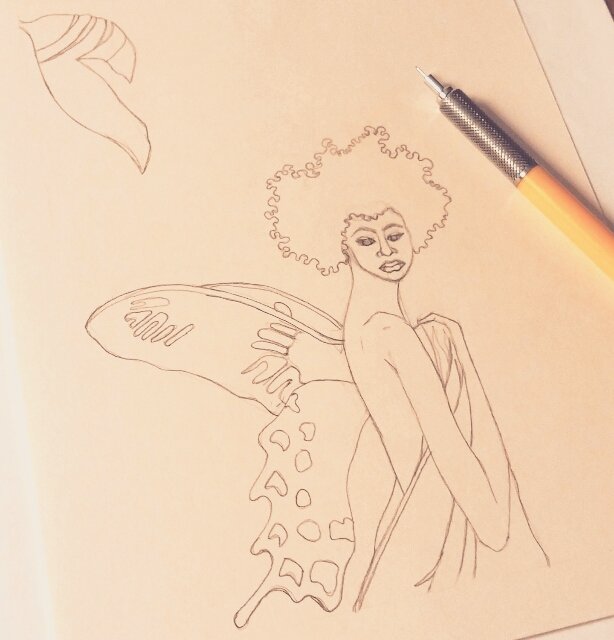